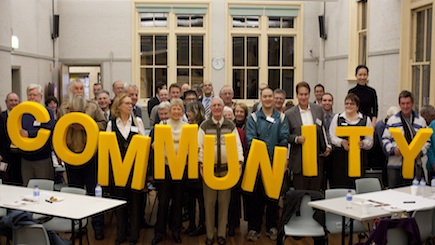 In response to invitations and publicity around 60 people put forward ideas for community projects at a community forum organised by Pyrmont’s Community Bank® Branch of Bendigo Bank. The bank wants community ideas so that projects with strong community backing can be selected and supported by the bank.

People with interests in education, environmental, historical, charitable, personal development, sporting, youth and other activities joined bank staff along with staff of the City of Sydney and local businesses to put forward ideas for community projects in Ultimo and Pyrmont.  The event was held at the Pyrmont Community Centre and the walls of the main hall were eventually covered by sheets of butcher’s paper containing suggested community projects.

“We are delighted with the response” said Bruce Napthali, chairman of the operating company  for the Pyrmont Community Bank® Branch. “One of the main reasons for setting up the bank is to channel funds back in to the community for worthwhile community causes. The outstanding turnout on the night showed the strong interest across the community in supporting this aim” he said, and added “ that while the money available at this stage of the Pyrmont Branch profitability was modest  the sum  would increase as the business developed”.

Wayne Simpson, Bendigo Bank’s State Community Enterprise Manager facilitated the event and pointed out that more than $56 million has been contributed to community projects by community bank branches across Australia. “The attendance from Ultimo and Pyrmont has been outstanding  and it was great to see people from all over the community swapping ideas for community projects” he said. “

The forum outcomes would be examined and  where appropriate  would be recommended to the branch.  “Community banks have achieved extraordinary results by transforming ideas into reality, especially when they also get additional support from Local, State and Federal  Governments, other authorities and business” Mr Simpson  said, adding “there are quite a number of ideas which are low cost to solve or may simply involve facilitating some introductions”.