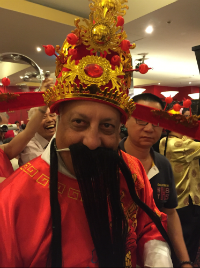 Pyrmont Community Bank® Branch got in to the swing of things in celebrating Chinese New Year and the Year of the Monkey.

Most of all, branch manager Garry Noel went all the way and took on the role of the God of Wealth.

The God of Wealth is worshiped by most Chinese. During the Chinese Spring Festival, every family will hang a picture of the god for blessings of good luck and great wealth.

In recent times more people regard Guan Yu, a famous general during the Three Kingdoms Period (200 AD), as God of Wealth and guardian angel for all trades. Guan Yu was loyal and courageous in his whole life. He would not compromise his principles for personal gains when lured with gold, silver and treasure. Ordinary people, especially merchants, admire and respect his loyalty and integrity and honour him as a patron saint of fortune making.

Garry took his “job” seriously and diligently and made sure everyone received the token of good luck. He was the centre of attraction during the whole procession. Many followed him around to take photos with the hope that some of his good luck and wealth will rub off. The bank’s support was appreciated by the Chinese community.